Question 1.
Choose the right answer from the four alternatives given below:

(i) Which one of the following places receives the highest rainfall in the world
(a) Silchar
(b) Mawsyi train
(c) Chefrapunji
(d) (Guahati)
Answer:
(c) Chefrapunji

(ii) The wind blowing in the northern plains in summers is known as:
(a) Kalbaisakhi
(b) Loo
(c) Mountain
(d) None of the above
Answer:
(b) Loo

(iii) Which one of the following causes rainfall during the winters in north-western part of India.
(a) Cyclonic depression
(b) Rdtrating Monsoon
(c) Western disturbances
(d) S.W. Monsoon
Answer:
(d) S.W. Monsoon

1. Latitude:
The Tropic of Cancer passes through the middle of the country from the Rann of Kuchchh in the west to Mizoram in the east. Almost half of the country,-lying south of the Tropic of Cancer, belongs to the tropical area. All the remaining area, north of the Tropic, is in the ‘sub-tropics. Therefore, India’s climate lias traits of tropical as well as subtropical climates.

2. Altitude:
India has mountains to the north, which have an average height of about 6,000 metres, with the highest peaks (some of them amongst the highest in the world) rising above 8,000 metres above sea level. India also has a vast coastal area where the maximum elevation is about 30 metres. The Himalayas prevent the cold winds from Central Asia from entering the subcontinent. It is because of these mountains- that the subcontinent experiences comparatively milder winters. Also, temperature differences are minimised between die tropical and subtropical India.

3. Pressure and Winds:
The climate and associated weather conditions, in India, are governed by (a) pressure and surface winds, upper air circulation, western disturbances, and tropical cyclones.

4. Relief:
The Himalayas act as a great barrier and save India from cold winds of Central Asia. On the other hand, the Western Ghats and the Khasi Hills in Meghalaya lie right across the path of the monsoon winds and cause heavy rainfall.

5. Location:
Being surrounded by the Arabian Sea, the Indian Ocean, and the Bay of Bengal, India gets lots of monsoon winds. On the other hand, the desert area causes much heat.

The climate of India in fact is also influenced by the climatic conditions over the rest of Asia.

(v) What are Jet streams And how do they affect the climate of India?
Answer:
The Jet streams are a narrow belt of high attitude (above 12000 m) westerly winds in the troposphere. Their speed varies from summer to winter. As it helps decrease temperature, it affects climate.

(vi) Define monsoons. What do you understand by ‘break’ monsoon?
Answer:
‘Monsoon’ word has been derived from the Arabic word ‘Mausam’ meaning season. ‘Monsoon’ is generally used to refer to indicate the rain-bearing winds which reverse their direction with the change of the season and blow” throughout the Indian sub-continent, specially‘during the summer season.

By ‘breade’ of the monsoon means the sudden approach of the moisture laden winds associated with violent thunder and lighting.

(vii) Why is the monsoon considered a unifying bard?
Answer:
The unifying influence of the monsoon on the Indian subcontinent is quite perceptible. The seasonal alteration of the wind systems and the associated weather conditions provide a rhythmic cycle of seasons. Even the uncertainties of rain arid uneven distribution are very much typical of the monsoons. The
Indian landscape, its animal and plant life, its entire agricultural calendar and the life of the people, including their festivities, revolve around this phenomenon. Year after year, people of India from north to south and from east to west, eagerly await the arrival of the monsoon. It is another matter as to how much rain it brings.

Question 5.
Give reasons as to why :
(i) Seasonal reversal of wind direction takes place over the Indian subcontient.
Answer:
Seasonal reversal of wind direction takes place over,the Indian sub-continent, because in summer land gets more heated than water, it forms a low pressure over the interior landmass of Asia. Air gets to start moving from the high pressure area located over Indian ocean in the South to the low pressure areas of the North; Hence a complete reversal occurs in the wind direction.

Question 6.
Describe the regional variations in the climatic condition of India with the help of suitable examples.
Answer:
The climate, of India, is mainly described as monsoon climate. However, it has lots of regional variations. These are the following:
1. Parts of Western Ghats and the Northern-Eastern parts of India receive more than 400 cm. of annual rainfall.

On the other hand, Rajasthan, Gujarat, leeward area of Western Ghats, and parts of Tamil Nadu receive only less them 40 cm. of rainfall.

There are areas even getting less than 20 cm. of precipitation. While there are parts with moderate rainfall.

2. Temperature also differs from part to part. For example, in the summer season temperature in day time at Jaislmer may cross 50°C. While in a winter night temperature may fall at—45°C in Drass.

3. The parts of India like the penirtsular region does not have a well defined cold-weather season. In fact in these areas, there is hardly any seasonal change in the distribution pattern of temperature because of the influence of the sea. Hence it is absolutely clear that there are lots of regional variations in the climatic condition of India.

Question 7.
Discuss the mechanism of monsoons.
Answer:
The monsoons are meant by the rainbearing seasonal winds blowing throughout the Indian sub-continent especially during the summer season.
Though the phenomenon of the monsoon is very old, yet its true nature could have been derived recently. The meteorologists have found out a seesaw in relationship between the meteorological changes going on over the Pacific and the Indian Ocean.

Whenever high pressure is created in the sub-tropical region of the Pacific Ocean, it tends to be low. This Well known fact causes the shifting of winds across the Equator in different directions. The shifting of winds across the Equator has the great bearing on. the monsoons. The monsoon winds are confined to tropical lands living between 20° N to 20°S latitudes. The Indian sub-continent, however having the Himalayan ranges, bring the whole sub-continent under the sway of the moist-bearing winds for two to five months roughly between May to October.

It is the reason of the saying, “India would have been an and land if there had been no phenomena of monsoons.”

Question 8.
Give an account of weather conditions and characteristics of cold reason.
Answer:
The cold weather season begins from mid-November in northern India and stays till February. December and January are the coldest, months. The temperature decreases from south to the north. The average temperature of Chennai, on the eastern coast, is between 24°-25° Celsius, while m the northern plains, it ranges between 10°-15° Celsius. Days are warm and nights are cold. Frost is common in the north and the higher slopes of the Himalayas experience snowfall. During this season, the northeast trade winds prevail over the country. They blow from land to sea and hence, for the most part of the country, it is a dry season. Some amount of rainfall occurs on the Tamil Nadu coast from these winds as here, they blow from sea to land. In the northern part of the country, a feeble high-pressure region develops, with light winds moving outwards from this area. Influenced by the relief, these winds blow through the Ganga valley from the west and the northwest The weather is normally fine, marked by clear sky, low temperatures and low humidity, and feeble variable winds.

A characteristic feature of the cold weather season over the northern plains is the inflow of depressions from the west and the northwest. These low-pressure systems, called the ‘Western Disturbances’, originate over the Mediterranean Sea and western Asia and move into India, along with the westerly flow. They cause the much-needed winter rains over the plains and snowfall in the mountains. Although the total amount of winter rainfall ‘mahawat’ is small, they are of immense importance for the cultivation of ‘rabi’ crops.

The peninsular region does not have a well-defined cold season. There is hardly any noticeable seasonal change in temperature pattern due to the influence of the sea.

Question 9.
Give the characteristics and effects of the monsoon rainfall in India.
Answer:
Monsoon is very, important phenomena for the climate of India. In fact, India would have been an arid land if there had been no phenomena of the monsoon.
Monsoons can be divided in the following types. 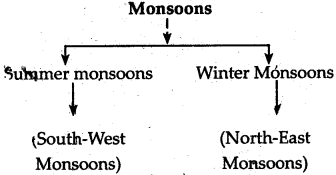 Except the east coast, of Tamil Nadu, the rest of India receives much of its rainf all in the summer by the Summer Monsoons.

The Summer Monsoons:
These are also known as the South-West Monsoons. During the summer months-March-May, the temperature rises steadily. Because of it low pressure is developed in early June, this low-pressure trough is intense enough to attract even the south-east Trade winds from south of the Equator. These winds are laden; with, moistures and are defected inland as south-westerly winds. These winds are very strong and in about a month this time overrun almost the entire country.

Nearly 90% of the rain in India comes from the monsoons which are called summer Monsoons.

The Deccan peninsula divides these monsoons into two breaches—
1. The Arabean Sea Branch,
2. The Bay of Bengal Branch.

The Arabian Sea Branch:
These monsoons strike the Western ghats and cause heavy rains in Konkar and Malabar. These monsoons become comparatively dry when they reaches the Deccan plateau and Madhya Pradesh.

The other branch of the Arabian Sea Monsoons passes over west Rajasthan and the Aravalli Hills. The monsoons are quite weak here. The Aravallis lie parallel to the direction of these monsoons. Hence, Rajasthan as a whole and especially the Thar desert receives little rain.”

Being very far away from the Bay of Bengal; the Thar desert does not get rain from the monsoons coming from that side.

On the other hand, in the Western. Himalayas in the Himachal Pradesh hills, these winds are joined by the Bay of Bengal Winds and cause heavy rains in these areas.

Mawsynram in Meghalaya receives the highest rainfall in the world.

The other branch of these Monsoons goes Westward along the Fiimalayas, iipto the Ganga Valley. By this time it reaches the plains of Punjab. This part is comparatively dry.

The rainfall decreases as it moves westward side of the Ganga valley.

This is the reason that Kolkata receives 120 cm of rainfall while Delhi gets only 56 cms.

The Winter Monsoons:
These monsoons are also known as the NorthrEast Monsoons. These winds blow from the land towards the sea, so they generally bring no rain. Yet they pick up some moisture while passing over the Bay of Bengal. Hence these winds bring heavy rains along the coromondal coast.

This is the reason that Tamil Nadu receives most of its annual rain in winter. That is mainly from November to March.