Question 1.
Choose the right answer from the four alterhatives given below:

(i) A landmark bounded by sea on three sides is regerred to as –
(a) Coast
(b) Island
(c) Peninsula
(d) name of the above
Answer:
(b) Island

(ii) Mountain ranges in the eastern part of India forming its boundary with Myanmar are collectively called as
(a) Himachal
(b) Uttranchal
(c) Puryanchal
(d) name of the above
Answer:
(c) Puryanchal

(iii) The western coastal strip, south of Goa is referred to as
(a) Coromandal
(b) Konkan
(c) Kannad
(d) Northern Circus
Answer:
(b) Konkan

(i) What are tectonic plates?
Answer:
Tectonics plates are those plates which form the crust of the earth. They are seven major and some minor plates.

(ii) Which continents of today were part of the Gondwana land?
Answer:
Parts of Asia/Australia, Africa and South America.

(iii) What is the bhabar?
Answer:
The narrow belt comprising of the pebbled beds parallel to slope of the river is callted bhabar.

(iv) Name the three major divisions of the Himalaya from north to south.
Answer:

Question 4.
Describe how the Himalayas are formed?
Answer:
The Himalayas are not very old mountains. Their origin is, infact, comparatively more recent. Before the Himalayas originated, there was the sea Tethys which slowly got filled by the silt brought by different rivers. When there mountains were formed due to the internal activities of the earth, the different layer and folds, maintained their identity.

The relief features of the Himalayan region and the Peninsular Plateau can be contrasted in relation to their characteristics.

The land of India displays great physical contrasts. Geologically, the Peninsular Plateau constitutes one of the ancient landmasses on the earth’s surface. It is also the most stable land block. The Himalayas and the other mountains of the North and the Plains lying between them and the Deccan Plateau display the most recent developments. Tectonically, they form one of the unstable zones. Over the millions of years, the denudational processes have made these contrasts even sharper. In sharp contrast to the very .youthful, topography with sheer, lofty peaks, steep-sided valleys of the mountains, composed of sedimentary and metamorphic rocks, the Northern Plains composed of alluvium, represent one of the world’s largest deposition surface. In the south the Peninsular plateau composed of igneous and metamorphic rocks depict a senile topography dominated by gently rising ridges and wide valleys. Howsoever, diverse, there exists a complementaity between these land features.

Question 6.
Give an account of the Northern Plains of India.
Answer:
The Northern plains of India have a rich soil cover, favourable climate and adequate water supply to support agriculture. These are an area with almost a level plain with little variation in relief.

In this area agriculture gets support from the favourable climate artd adequate water supply. The Himalayan rivers while flowing down the slopes of the mountain form alluvial fans reaching the plains.

The Northern plain of India extends between the mouths of the Indus and the Ganga-Brahamputra. It covers a distance of nearly about 3200 km: its width varies between 300-150 km. This area gets however towards the east.

At Hard war the Ganga enters the Northern Plains. On its way to the sea, it is joined by a number of. tributaries both from north and south.
The Ganga atter reaching West Bengal, turns south. The Sunderban delta of Northern India is formed by the Ganga and die Brahmaputra.
On the basis of the difference in the relief the Northern plain is divided mainly into four parts : 1 Bhabar, 2. Tarai, 3. Bhangar, 4. Khadar.

Question 7.
Write short notes on the following:
(i) The Indian Desert, (ii) The Central Highlands, (iii) The Island groups of India
Answer:
(i) The Indian Desert
The Indian Desert lies towards the western margins of the Aravali Hills. It is a sandy plain covered with sand dimes. This region receives very low rainfall below 150 mm per year. It has arid claimafe with low vegetation cover.

The Lakshdweep consists of many small islands Which, lie opposite the coast of Kerala in the Arabian Sea. The southernmost island of this group is very close to the Maldives. The islands of this group are formed of coral deposits.

On the other hand, the Andaman and Nicobar islands are bigger is size. They are more numerous and scattered. Andaman has about 200 island while Nicobar group contains 19 islands. These islands spread over 350 km. However, only a few of them spread over 350 km.

These island groups are of the great strategic importance for the country.

On the outline map of India, show the following
(i) Mountain and hill ranges : the Karakoram, the Zaskar the Patkai Bum, the Jaintia, the Vindhya range, the Aravali and the Cardamom hills.
(ii) Peaks: K2, Kunchanjunga, Nanga Porbat, and the Anai MudL
(iii) Plateaus: Chhotanagar and Malwa
(iv) The Indian Desert, Western Ghats, Lakshdweep Islands.
Answer:
See map (i), (ii), (iii) below:
Map (i) 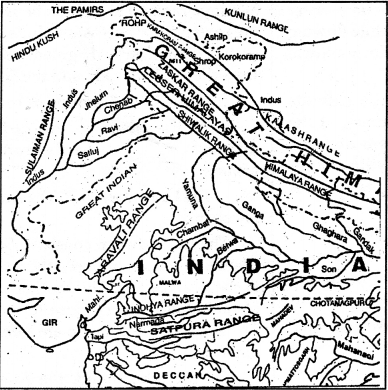 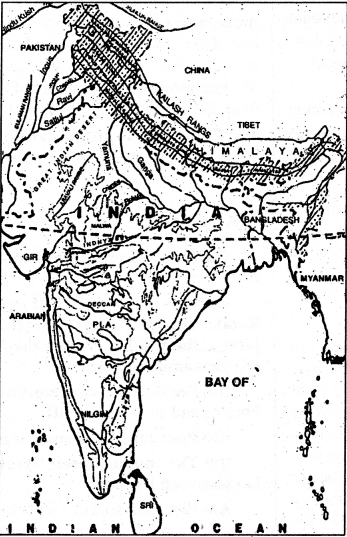 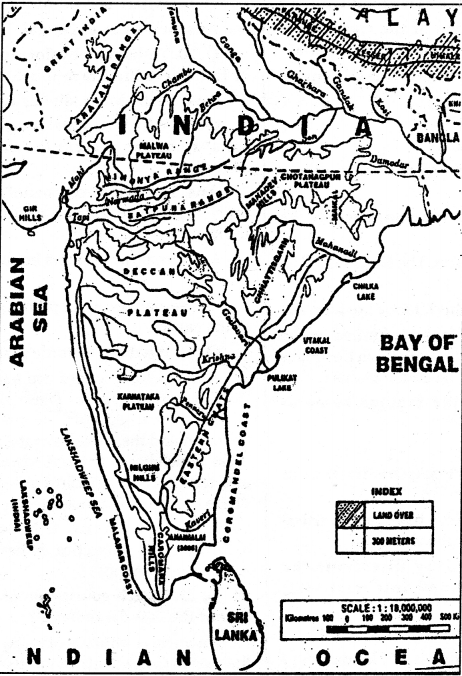