Question 1.
Choose the right answer from the four alternatives given below:

(i) The Tropic of Cancer does not pass through:
(a) Rajasthan
(b) Orissa
(c) Chhattisgarh
(d) Tripura
Answer:
(b) Orissa

(v) My friend hails from a country which does not share land boundary with India. Identify thf country *
(a) Bhutan
(b) Tajikistan
(c) Myanmar
(d) Nepal
Answer:
(c) Myanmar

(i) Name the group of islands lying in the Arabian sea?
Answer:
(i) Lakshdweep

Question 1.
Identify the following with the help of map reading:
(i) The Island groups of India lying in the Arabian Sea and the Bay of Bengal.
(ii) The countries constituting Indian Subcontinent.
(iii) The States through which the Tropic of Cancer passes.
(iv) The northernmost latitude in degrees.
(v) The southernmost latitude of the Indian mainland in degrees.
(vi) The eastern and the western most latitude in degrees.
(viii) The place situated on the three seas.
(ix) The strait separating Sri Lanka from India.
(x) The Union Territories of India.
Answer:
See the following two maps (i) and (ii) of India below :
Map (i) 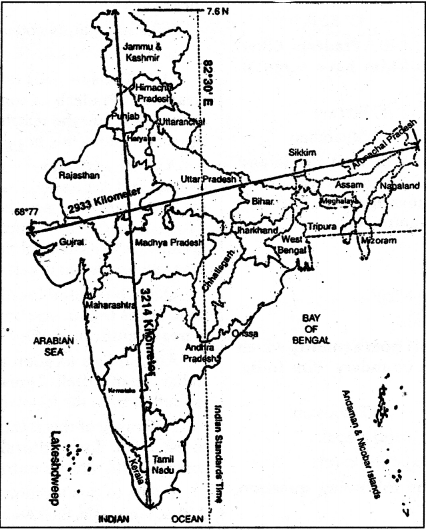 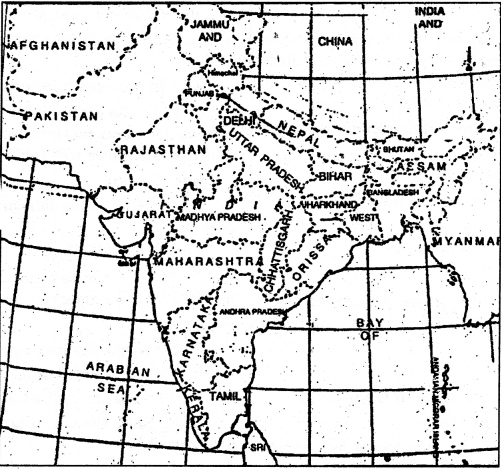