Question 1.
Why do different countries use different poverty lines?
Answer:
A person is considered poor if his or her income or consumption level falls below a given “minimum level” necessary to fulfill basic needs. What is necessary to satisfy basic needs is different at different times and in different countries. Therefore, poverty line may vary with.time and place. Each country uses an imaginary line that is considered appropriate for its existing level of development and its accepted minimum social norms.

Question 2.
What do you think is the minimum necessary level in your locality?
Answer:
Students are required to do it themselves.

Question 3.
Study the Table 3.1 and answer the following questions.
Table 3.1: Estimates of Poverty in India

(ii) The dynamics of poverty reduction are not same in rural and urban India whereas as poverty level is continously declining in rural India it is not so in urban area’s. In the year 1993-94 poverty in urban areas infact increased.

Question 4.
Observe some of the poor families around you and try to find the following:
(i) Which social and economic group do they belong to?
(ii) Who are the earning members in the family?
(iii) What is the condition of the old people in the family?
(iv) Are all the children (boys and girls) attending schools?
Answer:
Students should do it themselves.

Question 5.
Study the graph 3.2 and do the following:
(i) Identify the three states where, the poverty ratio is the highest 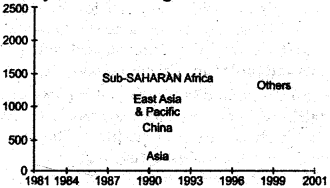 Graph 3.4. Number Of poor by region ($lper day) in millions 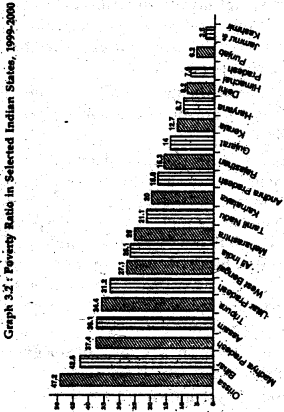 Poverty line is also measured on die basis of monetary expenditure per capita needed for buying these calorie requirements in terms of food-grains etc. On the basis of these calculations, for the year2000, the poverty line for a person was fixed at Rs 328 per month for the rural areas and Rs 454 for the urban areas.

Question 8.
Do you think the present methodology for poverty estimation is appropriate.
Answer:
The present method of measuring poverty is not adequate. It takes into consideration the minimum subsistence level and not the reasonable level of living. There is need to broaden the concept of poverty. A large number of people may be able to feed themselves but they do not have access to other necessities like education, sanitation, health, job security etc. They may not be free from caste and gender discrimination etc. Thus definition of poverty should be changed. Apart from food all the above things should be brought into its preview.

Question 9.
Describe poverty trends in India since 1973.
Answer:
There is a Substantial decline fit- poverty ratios in India from about 55 percent in 1973 to 36 percent in 1993. The proportion of people below poverty line further came down to about 26 percent in 2000. If the trend continues, people below poverty line may come down to less than 20 percent in the next ew years. Although, the percentage erf people living below poverty has decUned in the earlier two decades the number of poor remained stable around 320 million for a fairly long period. The latest estimates indicate a significant reduction in the number of poor to about 260 million.

Question 10.
Discuss the major reasons for poverty tit India.
Answer:
There are various reasons for poverty in India. Few of them ate listed below.
(i) British policy—The historical reason is the low level of economic development under the British colonial administration. The policies of colonial government ruined the traditipnal handicrafts and discouraged development of industries like textiles.

(iv) Migration of people from rural to urban , areas—Due to heavy pressure on agricultural land and absence of alternative occupation in rural areas people started migrating to urban areas. This intensified the problem of urban poverty. These people could not find job with adequate income therefore, started living in slums and under unhygienic conditions.

Question 12.
Give an account of interstate disparities in poverty in India.
Answer:
The proportion of poor people is not the same in every state. Though there is ‘ a decline in state level poverty, the success rate of reducing poverty varies from state to state. Recent estimates show that in 20 states and union territories, the poverty ratio is less than the national average. On the other hard, poverty is still a serious problem in Orissa, Bihar, Assam, Tripura arid Uttar. Pradesh: Orissa and Bihar ate the poorest state with poverty ratios of 47 and 43 percent respectively. Along with rural poverty, urban poverty is also high in Orissa, Madhya Pradesh) Bihar and Uttar Pradesh.

In comparison, there has been a significant decline in poverty, in Kerala, Jammu and Kashmir;’Andhra Pradesh, Tamil Nadu, Gujarat and West Bengal. States like Punjab arid Haryana have traditionally succeeded in reducing poverty with the help of high agricultural growth rates. They have succeeded in reducing poverty due to human resource development. In West Bengal, land reform measures have helped in bringing down poverty levels. In Andhra Pradesh and Tamil Nadu public distribution system have been responsible for the improvement.

Question 13.
Describe global poverty trends.
Answer:
The proportion of people in developing countries living in extreme economic poverty—defined by the World Bank as living on less than $ 1 per day—has fallen from 28 per cent in 1990 to 21 per Cent in 2001. Although there has been a substantial reduction in global poverty, it is marked with great regional differences. Poverty declined substantially in China and Southeast Asian countries as a result of rapid economic growth and massive investments in human resource development. Number of poors in China has come down from 606 million in 1981 to 212 million in 2001 In the countries of South Asia (India, Pakistan, Sri Lanka, Nepal, Bangladesh, Bhutan) the decline has notbeen as rapid. Despite decline in the percentage of the poor, the number of poor has declined marginally from 475 million in 1981 to 428 million in 2001. Because of different poverty line definition, poverty in India is also shown higher than, the national estimates.

In sub-Saharan Africa, poverty in fact rose from 41 per cent in 1981 to 46 per cent in 2001. In Latin America, the ratio of poverty remained the same. Poverty has also resurfaced in some of the former socialist countries like Russia, where officially it was non-existent earlier. The Millennium Development Goals of the United Nations calls for reducing the proportion of people living on less than $ 1 a day to half, the 1990 level by 2015.

Question 14.
Describe current government strategy of poverty alleviation.
Answer:
The currentanti-poverty strategy of the government is based broadly on two planks—
(i) promotion of economic growth.
(ii) targeted anti-poverty programmes.

(i) Promotion of economic growth—for a long period percentage of poor (45) remained stagnant. It started falling with tire increase in economic growth rate in eighties. The growth rate increased from 3.5 percent in 1970’s to about 6 percent during 1980’s and 1990’s The higher growth, rates have helped significantly in the reduction of poverty. Thus; there is a strong link between economic growth and poverty reduction. Economic growth widens opportunities and provides the resources needed to invest in human development.

This also encourages people to send their children, including girls, to schools in the hope of getting better economic returns from investing in education.

(a) National Rural Employment Guarantee Act (2005)—
It was passed in September 2005. The act provides 100 days assured employment every year to every rural household in 200 districts. Later, the scheme will be extended to 600 districts. One-third of the proposed jobs would be reserved for. women.

(b) National Food for Work Programme—
It was launched in 2004 in 150 most backward districts of the country. The programme is open to all rural poor who are in need of wage employment and desire to do manual work. It is implemented as a 100 percent centrally sponsored, scheme and food-grains are provided free of cost to the states.

(iii) Prime Minister Rozgar Yozana—It was started in 1993.
In it youths are helped in settiiig up small business and industries in rural areas and small towns.

(iv) Rural Employment Generation Programme—
It was launched in 1995. The aim of the programme is to create self employment opportunities in rural areas and small towns. A target of creating 25 lakh hew jobs has. been set up for the programme under the tenth five-year plan.

(v) Swarnajayanti Gram Swarozgar Yojana—
It was launched in 1999. The programme aims at bringing the assisted poor families above the poverty line by organising them into self help groups through a mix of bank credit and government subsidy.

Question 15.
Answer file following questions briefly—
(i) What do you understand by human poverty.
(ii) Who are the poorest of the poor?
(iii) What are the main features of the National Rural Employment Guarantee Act 2005?
Answer:
(i) Today many scholars advocate that one must broaden the concept of poverty into human poverty. By it they mean that while measuring poverty instead of minimum subsistence level we must consider reasonable 5 level of living. It must include in its purview availability of basic education, health care, sanitation, job security gender equality etc.

(iii) Main features of National Rural Employment Guarantee Act 2005 are:
(a) It provides 100 days assured employment every year to every rural household in 200 districts.
(b) One-third of the proposed jobs would be reserved for’ women.
(c) If the.applicant is not provided employment within fifteen days he/she will be entitled to a daily unemployment allowance.