Question 1.
The following table 1.1 shows the and under cultivation in India in units of million Hectares. Plot this on the graph provided. What does the graph show? Discuss in class.
Table 1.1 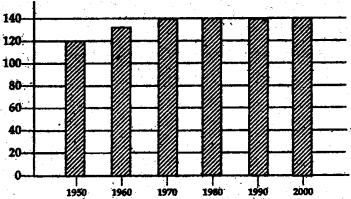 (ii) Students are required to do it themselves.

2. Modem methods of fanning—The other way of increasing production is to use modern farming methods for higher yield. This can be done by using high yielding variety of seeds. These seeds need good irrigation system, chemical fertilizers, and pesticides. Farm machines like tractors and threshers, make ploughing and harvesting faster.

(iv) Modem fanning methods require the farmer to start with more cash than before why?
Answer:
The working capital required by the farmer using modem farming method is chemical fertilizers, pesticides and HYV seeds. Also they require good irrigation system.

The HYV seeds, chemical fertilizers and pesticides are prepared in industries and therefore are costlier than traditional seeds and natural fertilizers. For developing a good irrigation system a farmer needs to get electric-run tubewells and electricity connection. For these he has to pay charges. Also, some of the farmers buy farm machinery like, tractors and tubewells which make ploughing and harvesting faster. For all the above mentioned things a farmer requires good cash. Therefore, we can say that modern farming methods require the farmer to start with more cash than before.

During your field visit talk to some farmers of your region. Find out:
1. What kind of fanning methods—modern or traditional or mixed—do the farmers use. Write a note.
2. What are the sources of irrigation?
3. How much of the cultivated land is irrigated? (Very little/nearly half/majority/all).
4. From where do farmers obtain the inputs that they require?
Answer:
Students are required to do it themselves.

After reading the following reports from newspapers/ magazines, write a letter to the Agriculture Minister in your own words telling him how the use of chemical fertizliers can be harmful.

….Chemical ferdizliers provide, minerals which dissolve in water and are immediately available to plants. But these may not be retained in the soil for long. They may escape from the soil and pollute ground water, rivers and lakes, chemical fertilizers can also kill bacteria and other microorganisms in the oil. This means some time after their use, the soil will be less fertile than over before (Source Down to Earth, New Delhi).

…….The consumption of chemical ferdizliers in Punjab is highest in the country. The continuous use of chemical fertilizers, has led to degradation of soil health. Punjab farmers are now forced to use more and more chemical fertizliers and other inputs to achieve the same production level. This means cost of cultivation is rising very fast……(Source: The Tribune, Chandigarh)
Answer:
To;
The Agriculture Minister
Dept, of agriculture
New Delhi
Sir/Madam,
Sub : The effects of chemical fertilizers

This letter is to divert your attention to the ill effects of chemical fertilisers on our health and soil fertility. To* grow more from the same land farmers use these fertilizers in very high quantity without realizing its effects. These fertilizers escape from the soil and pollute ground water, rivers and lakes. When we drink this polluted water it effects our health. Also, these chemical fertilisers kill bacteria and other micro-organisms in the soil. It effects the fertility of soil. The continuous use of chemical fertilisers has led to the degradation of soil health. The farmers are now forced to use more and more chemical fertilisers and other inputs to achieve the same production level. This has increased the cost of production as a result the prices of crops have increased.

As chemical fertilisers are harmful for our environment and health government should restrict their use. It should encourage farmers to use bio fetilisers and manure.

I hope the ministry concerned will pay attention to it.

Thanking you
Yours Sincerely
X.Y.Z.