Question 1.
Imagine you are a textile weaver in late nineteenth-century India. Textiles produced in Indian factories are flooding the market. How would you have adjusted to the situation?
Answer:
Hints :

Question 2.
What kinds of cloth had a large market in Europe?
Answer:
There were a large varieties of cotton and silk clothes in a large market in Europe. Some of such clothes, Cassaes or Khassa, and Bandana which were brightly coloured and printed scarf. There were other clothes that were noted by their place of origion such as Kasim bazar, Patna, Calcutta and Orissa.

Question 3.
What is jamdani?
Answer:
Jamdani is a fine muslim on which decorative motifs were woven on the loom, typically in grey and white.

Question 4.
What is bandanna?
Answer:
Bandanna refers to any brightly coloured and printed scarf for the neck or head.

Question 5.
Who are the Agaria?
Answer:
Agarias are a group of men and women who are carry basket loads of iorn ore.

Similarly, Chintz were printed cotton clothes. The term Chintz was derived from the Hindi word chhint, a cloth with small and colourful flowery designs. Bandanna was another name for brightly coloured and printed scarf. The term Bandanna was derived from the word ‘bandhna’ and referred to a variety of brightly coloured cloth produced through a method of tyeing and dyeing.

There were other cloths in the order book that were noted by their place of origin : Kasimbazar, Patna, Calcutta, Orissa, Charpoore. The widespread use of such words shows how popular Indian textiles had become in different parts of the world.

Question 8.
Why did the wool and silk producers in England protest against the import of Indian textiles in the early eighteenth century?
Answer:
By the early eighteenth century, worried by the popularity of Indian textiles, wool and silk makers in England began protesting against the import of Indian cotton textiles. In 1720, the British government enacted a legislation banning the use of printed cotton textiles-chintz-in England. Interestingly, this Act was known as the Calico Act.

At this time textile industries had just begun to develop in England. Unable to compete with Indian textiles, English producers wanted a secure market within the country by preventing the entry of Indians textiles.

Question 9.
How did the development of cotton industries in Britain affect textile producers in India?
Answer:
The development of cotton industries in Britain affected textile producers in India in several ways, First: Indian textiles now had to compete with British textiles in the European and American markets. Second : exporting textiles to England also became increasingly difficult since very high duties were imposed on Indian textiles imported into Britain.

By the beginning of the nineteenth century, English-made cotton textiles successfully ousted Indian goods from their traditional markets in Africa, America and Europe. Thousands of weavers in India were now thrown out of employment. Bengal weavers were the worst hit. English and European companies stopped buying Indian goods and their agents no longer gave out advances to weavers to secure supplies. Distressed weavers wrote petitions to the government to help them.

But worse was still to come. By the 1830 British cotton cloth flooded Indian markets. In fact, by the 1880s two-thirds of all the cotton clothes worn by Indian were made of cloth produced in Britain. This affected not only specialist weavers but also spinners. Thousands of rural women who made a living by spinning cotton thread were rendered jobless.

One reason was the new forest laws. When the colonial government prevented people from entering the reserved forests, the iron smelted could not find wood for charcoal. Defying forest laws, they often entered the forests secretly and collected wood, but they could not sustain their occupation on the basis for long. Many gave their craft and looked for other means of livelihood.

In some areas the government did grant access to the forest. But the iron smelters had to pay a very high tax to the forest department for every furnace they used. This reduced their income.

Moreover, by the late nineteenth century iron and steel was being imported from Britain. Ironsmiths in India began using the imported iron to manufacuture utensils and implements. This inevitably lowered the demand for iron produced by local smelters.

Question 11.
What problems did the Indian textile industry face in the early years of its development?
Answer:
In the first few decades of its existence, the textile factory industry in India faced many problems. It found it difficult to compete with the cheap textiles imported from Britain. In most countries, governments supported industrialisation by imposing heavy duties on imports. This eliminated competition and protected infant industries. The colonial government in India usually refused such protection to local industries. The first major spurt in the development of cotton factory production in India, therefore, was during the First World War when textile imports from Britain declined and Indian factories were called upon to produce cloth for military supplies.

Question 12.
What helped TISCO expand steel production during the First World War?
Answer:
In 1914 the First World War broke out. Steel produced in Britain now had to meet the demands of war in Europe. So imports of British steel into India declined dramatically and the Indian Railways turned to TISCO for supply of rails. As the war dragged on for several years, TISCO had to produce shells and carriage wheels for the war. By 1919 the colonial government was buying 90% of the steel manufactured by TISCO. Over time TISCO became the biggest steel industry within the British empire.

Question 13.
Find out about the history of any craft around the area you live. You may wish to know about the community of craftsmen, the changes in the techniques they use and the markets they supply. How have these changed in the past 50 years?
Answer:

Question 14.
On a map of India, locate the centres of different craft today. Find out when these centres came up?
Answer:
Most of the centres are very old; some way in the late eighteenth and early nineteenth centuries. 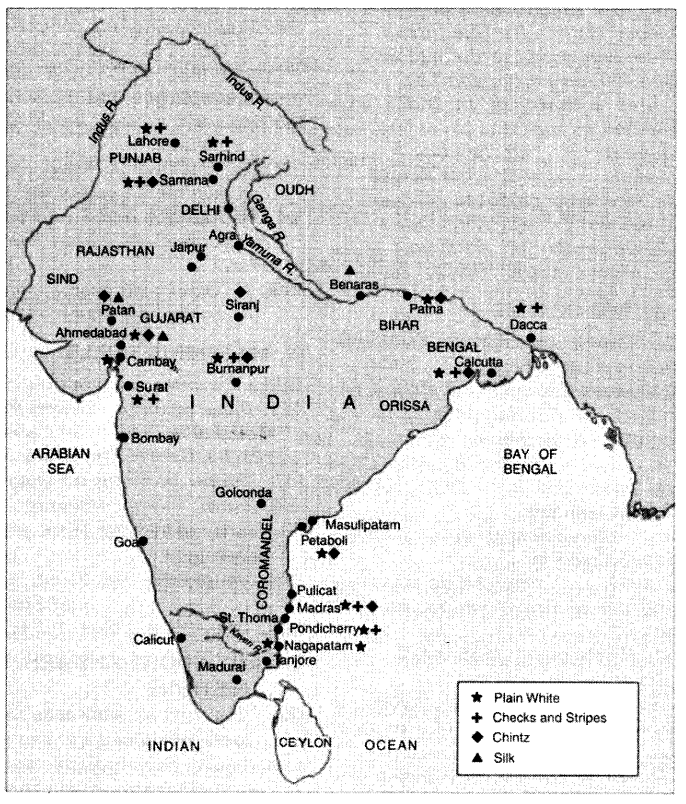 Activity 1
Why do you think the Act was called the Calico Act? What does the name tell us about the kind of textiles the Act wanted to ban?
Answer:
In 1720, the British government enacted a legislation banning the use of printed use of cotton textiles-Chintz-in England. This Act was called the Calico Act. Chintz is derived from the Hindi word chhint, a cloth with small and colourful designs. The Act wanted to ban cotton textiles produced in India.

Activity 2
Read sources 1 and 2. What reasons do the petition writers give for their condition of starvation?
Answer:
In source I the weaver received advances for the company to maintan themselves before but due to the abolishment of aurangs, they are distressed and have no means of livelihood. They are starving and cannot do any other business.

In source 2, a widower and her family are on the verge of collapse. The weavers do not come to their home for buying yarn and of the yarn is sent to the market, it is sold at one fourth the old price. It is due to imported yarn the market of Indian yarn has suffered.