Tribals, Dikus and the Vision of a Golden Age Class 8 Questions and Answers History Chapter 4

Question 1.
Imagine you are a jhum cultivator living in a forest village in the nineteenth century. You have just been told that the land you were born on no longer belongs to you. In a meeting with British officials, you try to explain the kinds of problems you face. What would you say?
Answer:
We will try to explain to the British officials the following kinds of problems :

Question 3.
State whether True or False :
1. Jhum cultivators plough the land and sow seeds.
2. Cocoons were bought from the Santhals and sold by the traders at five times the purchase price.
3. Birsa urged his followers to purify themselves, give up drinking liquor and stop believing in witchcraft and sorcery.
4. The British wanted to preserve the tribal way of life.
Answer:

Question 7.
What was Birsa’s vision of a golden age? Why do you think such a vision appealed to the people of the region?
Answer:
Birsa’s Vision of Golden Age :
Birsa’s vision of a golden age was that period when the Mundas had been free of the oppression of dikus, and said there would be a time when the ancestral right of the community would be restored. They saw themselves as the descendants of the original settlers of the region. Fighting for their land (mulk ki larai) reminding people of the need to win back their Kingdom.

I think that such a vision appealed to the people of the region because with the arrival of dikus (outsiders), forcing agents of the British, the traders, the moneylenders, etc. the tribal people lost their traditional rights on Jal, Jungal and Jameen (water, forest and land, They had to pay very heavy rate of interest to the moneylenders.

In 1895, Birsa urged his followers to recover their glorious past. He talked of a golden age in the past—a Satyug (the age of truth) when Mundas lived a good life constructed embankments, tapped natural springs, planted trees and orchards, practised cultivation to earn their living. They did not kill their brethern and . relatives. They lived honestly. Birsa also wanted people to once again work on their land, settle down and cultivate their fields.

Question 8.
Find out from your parents, friends or teachers, the names of some heroes of other tribal revolts in the twentieth century. Write their story in your own words.
Answer:
Some more important movements of that time were :
Santhal Movement :

Causes of the rise of this movement : Following were the main causes :

All these factors annoyed Bhai Ram Singh and he decided to launch the movement to overthrow British rule.

Question 9.
Choose any tribal group living in India today. Find out about their customs and way of life and how their lives have changed in the last 50 years.
Answer:
Hints :

Activity 1
Look carefully at the tasks that Baiga men and women did. Do you see any pattern? What were the differences in the types of work that they are expected to perform?
Answer: 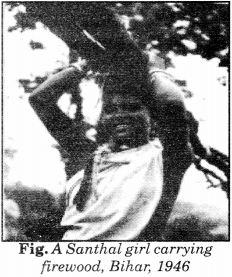 Baiga men hunted animals and cut big trees while the women cut stalks that were already reaped, collected wood for burning and cooking. Actually all the tribals had the same pattern. For menfolk it was mostly hunting and cutting big tree while for women folk some changes of work was noticed.

Activity 2
Find out whether the conditions of work in the mines have changed now. Check how many people die in mines every year, and what are the reasons for their death?
Answer:
Yes, now a days a lot of changes has occurred in the condition of work in the mines. Today, computer and modern technology is being used for mining. However, in developing countries the conditions of work are not that advanced. These countries use the same old pattern of mining. Even today many people die in the mines. The reasons are old methods of mining, no modern tools , poisonous gases, old technology and not much experience.