Question 1.
You are witness to an argument between an adivasi and a person who is opposed to the reservation of seats and jobs. What might be the arguments you heard each of them put forward? Act out the conversation.
Answer:
Hints :
Adivasi — “We are also Indians, we have full right in all types of jobs”
Person — “No, you are of lower caste”. “You do not have the right to rule over us.
Adivasi — Why? “Has God given you more powers”
Person — ‘Yes ! We are of high castes.”
Adivasi — ‘You have the same blood as we have.”
Person — “Yes ! I oppose the reservation of seats given to you all.” Adivasi — “We will fight for our rights.”

Question 5.
State whether true or False :
1. At independence, the majority of Indians lived in villages.
2. The Constituent Assembly was made up of members of the Congress Party.
3. In the first national election, only men were allowed to vote.
4. The Second Five Year Plan focused on the development of heavy industry.
Answer:
1. True
2. False
3. False
4. True

Question 6.
What did Dr. Ambedkar mean when he said that ‘In politics we will have equality, and in social and economic life we will have inequality?
Answer:
What Dr. Ambedkar wanted to say was that providing voting right to the lower caste people would not remove other inequalities such as between rich and poor or between upper castes and lower castes. These classes of people could be labelled equal only politically but in reality it could not be passible due to our social and economic structure.

Question 7.
After Independence, why was there a reluctance to divide the country on linguistic lines?
Answer:
Back in the 1920s, the Indian National Congress—the main party of the freedom struggle—had promised that once the country won independence, each major linguistic group would have its own province. However, after independence the

Congress did not take any steps to honour this promise. Both Prime Minister Nehru and Deputy Prime Minister Vallabhabhai Patel were against the creation of linguistic states. So there was a reluctance to divide the country on the linguistic lines.

Question 9.
How was the economic development of India visualised in the early decades after independence?
Answer:
Lifting India and Indians out of poverty and building a modern technical and industrial base were among the major objectives of the new nation. In 1950, the government set up a Planning Commission to help design and execute suitable policies for economic development. There was a broad agreement on what was called “a mixed economy” model. Here, both the state and the private sector would play important and complementary roles in increasing production and generating jobs. What specifically, these roles were to be—which industries should be initiated by the state and which by the market, how to achieve a balance between the different regions and states was to be defined by the Planning Commission.

In 1956, the Second Five Year Plan was formulated. This focused strongly on the development of heavy industries such as steel, and on the building of large dams. These sector would be under the control of the state. This focus on heavy industry, and the effort at state regulation of the economy was to guide economic policy for the next few decades. This approach had many strong supporters, but also some vocal critics.

Question 10.
Who was Mira Behn? Find out more about her life and her ideas?
Answer:
Mira Behn was the daughter of a British Admiral. Actually, her real name was Madeline Shade. She came to India to work with Mahatma Gandhi. She devoted her life to human development. She lived according to Gandhiji’s principles and also supported the freedom struggles. In 1982 she was awarded the Padma Vibhushan.

Activity 1
Imagine that you are a British administrator leaving India in 1947. You are writing a letter home where you discuss what is likely to happen to India without the British. What would be your views about the future of India?
Answer:
Hints :
India’s future very dull
A war will take place between Hindus and Muslims — There will be no unity and development in the country — Caste distinction well destroy India.

Activity 2
Imagine a conservation between a father and son in a Muslim family. After partition, the son thinks it would be wiser for them to move to Pakistan while the father believes that they should continue to live in India. Taking information from the chapter so far (and chapter-11), act out what each would say.
Answer:
Son — “Father, let us shift to Pakistan.”
Father — “No son. It is better to stay here. India can make more progress than Pakistan.
Son — “But we will be treated as minorities”. Are conditions will be worse.” Father — “No Son.” “In India the leaders are broad minded. They will treat every one as equal”.

Activity 3
Discuss in year class, our advantage and one disadvantage today of the decision to keep English as a language of India.
Answer:
Hints :
Adv. — In today’s computer world English is a must.
Disadv. — Children will never knew about their regional language.

Activity 4
Look at Figs. 1 (a), 1 (b) and 1 (c). Notice how the Princely States disappear in 1 (b) identify the new states that were formed in 1956 and later and the languages of these states.
Answer:
The new states formed were Haryana (Heryani), Gujarat (Gujarati), Maharashtra (Marathi), Meghalaya, Manipur, Nagaland, Tripura Mizoram, Arunachal Pradesh, Andhra Pradesh, etc. 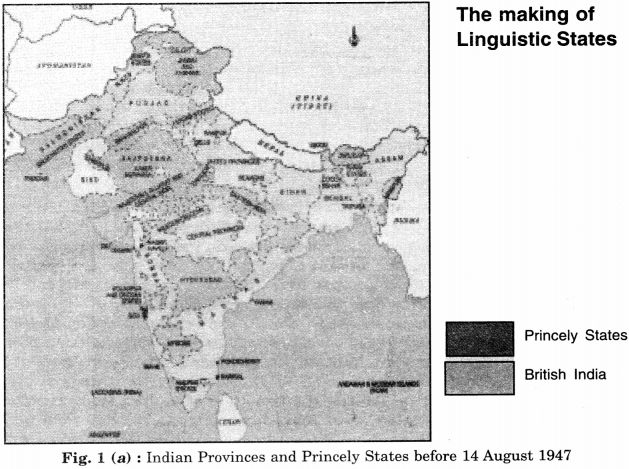 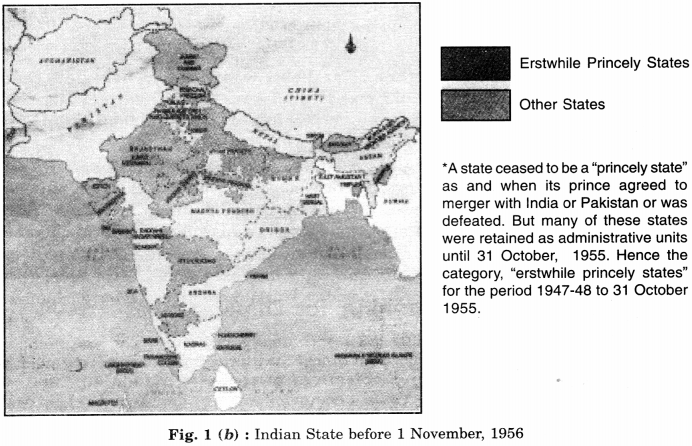 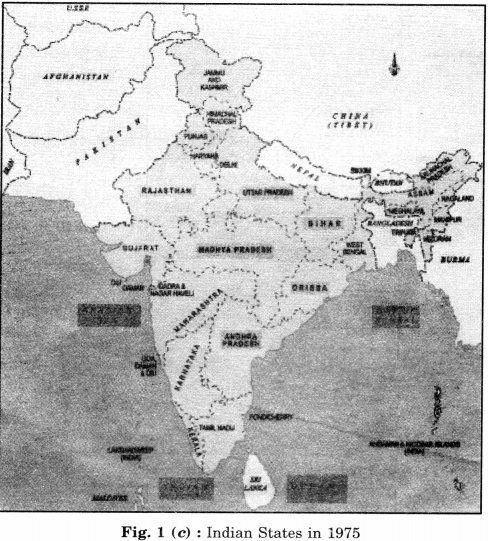