How, When and Where Class 8 Questions and Answers History Chapter 1

Question 1.
Imagine that you are a historian wanting to find about how agriculture changed in a remote tribal area after independence. List the different ways in which you would find information on this.
Answer:
(a) First of all I will consult administrative records, related to tribal areas agriculture and also check surveys conducted by different agencies.
(b) Secondly I will check old records, notices and reports of the officials pertaining to the tribal areas.
(c) Thirdly I will check the documents produced by different scholars, both Indians and the Europeans concering the economy of the tribal people.

Question 3.
What is the problem with the periodisation of Indian history that James Mill offers?
Answer:
The period of Indian history was divided by James Mill on communal lines. He considered Asian societies at much lower level than civilisation of Europe. He had wrong or different notion about the achievements of the Indians during the ancient and medieval periods. He merely gave credit to the western people for development and progress made by the Indians only to the colonial rule.

Question 4.
Why did the British preserve official documents?
Answer:
The Britishers preserved officials documents inorder to have permanent record. They had a habit to carefully preserve all the documents.

Question 6.
Can you think of examples of surveys in your world today? Think about how toy companies get information about what people enjoy playing with or how the government finds out about the number of young people in school. What can a historian derive from such surveys?
Answer:
Yes, we can get information after the surveys by means of latest technique.

Now a days, it is an electronic world. Most of the children prefer latest toys such as remote cars, helicopters, talking dolls etc. Thus, toy companies produce those goods which are liked by the children now a days.

The government can get records or reports from schools, about the number of students, their bio-data and also a brief history of their lives.

The historians derive useful information to get correct records and then they compare the performance of different school’s population, standard of achievements etc.

Activity I
Look carefully at Fig. and write a paragraph explaining how this image projects an imperial perception. 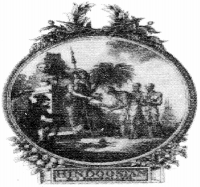 Fig. Brahmans offering the Shastras to Britannia, frontispiece to the first map produced by James Rev.nel, 1782

Answer:
Robert Clive told Rennel to produce maps of Hindustan. Rennel an enthusiastic supporter of British conquest of India, saw preparation of maps as essential to the process of domination. From the above picture, we come to know that Indians willingly gave their ancient texts to Britannia the symbol of British power—as if asking her to become the protector of Indian culture. This image projects an imperial perception.

(b) Who and when produced the first map?
Answer:
James Rennel in the year 1782.

Activity II
Look at sources 1 and 2. Do you find any difference in the nature of reporting? Explain what you observe.
Answer:
(a) Source 1 is a sample of reports the Home Department got from the different dockyards. This report was not meant for the general public but was a direct link between the Home Department and the military.

(b) Source 2 is a newspaper report providing accounts of the movements in different parts of the country. This report can be read by the entire nation.