Question 2.
List two reasons why you believe an independent judiciary to essential to democracy.
Answer:

Question 3.
Write two sentences of what you understand about the appellate system from the given case.
Answer:
According to appellate system, a person can appeal to a higher court against the judgement of the lower court. The Supreme Court, the highest judicial authority has the power to review the decisions of the High Courts and give its own judgements.

Question 4.
Fill in the table given below based on what you have understood about criminal and civil law.

Answer:
(a) In the first case the Branch of law is Criminal procedure to be followed :

(b) In the second case, the Branch of Law is Civil :

Question 5.
You read that one of the main function of the judiciary is ‘upholding the law and Enforcing Fundamental Rights. Why do you think an indepen¬dent judiciary is necessary to carry out this important function?
Answer:
Only an independent judiciary can protect our Fundamental Rights. The judi¬ciary is after all above all prejudices. It is above all caste creed or religion. For this reason it conducts a fair trail and gives fair justice. The judiciary has no influence of any individual or machinery.

Question 7.
In the following illustration, fill in each tier with the judgements given by the various courts in the Sudha Goel case. Check your responses with others in class.

Supreme Court:
The Supreme Court found Laxman and his mother guilty but acquitted the brother-in-law Subhash because they did not have enough evidence against him. The accused were given life imprisonment by the Supreme Court.

Question 8.
Keeping the Sudha Goel case in mind, tick the sentences that are true and correct the ones that are false.
1. The accused took the case to the High Court because they were unhappy with the decision of the Trial Court.
2. They went to the High Court after the Supreme Court had given its decision.
3. If they do not like the Supreme Court verdict, the accused can go back again to the Trial Court.
Answer:

Question 10.
Re-read excerpt from the judgement on the Olga Tellis vs Bombay Municipal Corporation case. Now write in your own words what the judges meant when they said that the Right to Livelihood was part of the Right of Life.
Answer:
According to the judges no person can live without the means of livelihood.

Question 11.
Write a story around the theme, ‘Justice delayed is justice denied’.
Answer:
Students are asked to write their own story about the above topic.

Question 12.
Make sentences with each of the glossary words given on the next page.
Answer:
Acquit:
The High Court acquitted Mr. Verma of the charges of murdering his wife.

To appeal:
Mr. Khurana approached the Supreme Court to appeal against the judgement of the High Court.

Compensation:
The High Court asked the factory owner to pay compensation to the worker injured in his factory.

Eviction:
The tanant faced eviction for not paying the rent for six months.

Violation:
My friend was fined for violation of traffic rules.

Question 13.
The following is a poster made by the Right to Food campaign.
Read this poster and list the duties of the government to uphold the Right to Food.
How does the phrase “Hungry stomachs, overflowing godowns! We will not accept it! used in the poster relate to the Photo essay on the Right to Food on page 61? 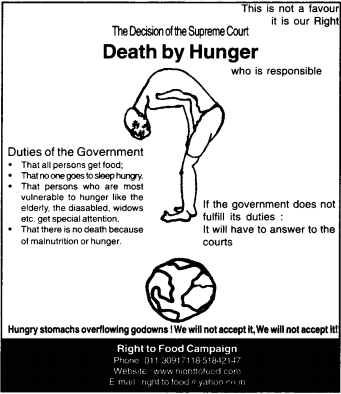 Answer:
The constitution of India provides Right to Food under the Fundamental Rights. The government is solely liable if this Right is hurt or affected by any reason. The government is responsible if anyone dies due to hunger. Recently we have heard cases of suicide of farmers in newspapers. The government must stop such happenings. Sometimes traders cause shortage of food due to hoardings. Such hoarder should be strictly punished by the government.
(b) Citizens and the government