Question 2.
What do you understand by domestic ‘violence’? List the two rights that the new law helped achieve for women who are survivors of violence.
Answer:
‘Domestic Violence’ refers to the injury or harm or threat of injury harm caused by an adult, usually the husband, against his wife. The injury may be caused due to physical beating up the female or by emotionally abusing her, which includes verbal, sexual or economic abuse.

The two rights that the new law helped achieve for women who are survivors of violence includes :

Question 3.
Can you list one process that was used to make more people aware of the need for this law?
Answer:
Public discussion.

Question 4.
From the story board given in text book pages 46, 47 and 48, can you list two different ways in which people lobbied Parliament?
Answer:

Often women who face violence or are abused are seen as victims. But women struggle in several different ways to survive these situations. Therefore, it is more accurate to refer to them as survivors rather than as victims. 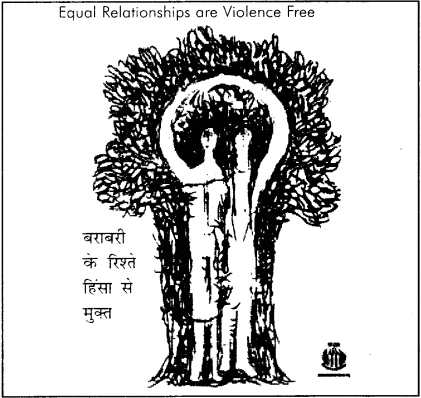 Question 6.
List the three forms of protest that you see in the photos.

Question 7.
Write in your own words what you understand by the term the ‘rule of law’. In your response include a fictitious or real example of a violation of the rule of law.
Answer:
‘Rule of law’ means all laws apply equally to all citizens of India irrespective of casting religion, sex, poor or rich. No one is above the law, not even the President of India. No one can be arrested for no crime he or she has done. Any violation of law has a specific punishment. A person is punished according to the type of crime he or she has committed.
Examples of violation of the ‘rule of law’.

Question 9.
Re-read the story board on how a new law on domestic violence got passed. Describe in your own words the different ways in which women’s groups worked to make this happen.
Answer:
The government felt the need for a new law when complaints by the victims of domestic violence increased.

Question 10.
Write in your own words what you understand by the following sentence on page 44-45 : They also began fighting for greater equality and wanted to change the idea of law from a set of rules that they were forced to obey, to law as including ideas of justice.
Answer:
The arbitrary use of authority by the British pinched the Indian nationalists. They wanted to uproot it in order to bring equality. They wanted to eliminate the colonial laws which were in no way justified to establish the rule of law in the country.