In arcuatef style of architecture the weight of the superstructure above the door and window was carried by archs.

Question 2.
What is a Shikhara?
Answer:
A shikhara is the pyramid structure on the central shrine of the temple.

Question 4.
What are the elements of a Mughal Chahar Bagh Garden?
Answer:
At Agra, the nobility had constructed their homes on the baak s of the river Yamuna. These were set in the midst of formal gardens constructed in the Chahar Bagh format. These gardens were placed within rectangular walled enclosures and divided into four quarters by artificial channels. These gardens came to be known by the name of the four gardens (Chahar Bagh) due to their essential element of symmetry and division of four equal quarters. The Chahar Bagh garden also had a variation that historians deseribe as the river front gardenf. In this the dwellings was not located in the middle of the Chahar Bagh but at its edge, close to the bank of the river.

Question 5.
How did a temple communicate the importance of a King?
Answer:
Temples are the places of worship. They were also meant to demonstrate the power, wealth and devotion and patron by the ruler. In medieval period and even before a number of temples were constructed by ruler (kings). Temples were the miniature model of the world ruled by the king and his allies. As they worshipped their gods and goddess (deities) together in a royal temples it seems as if they brought the just rule of god on the earth.

Question 6.
An inscription in Shah Jahan’s Diwan-i-Khas in Delhi stated : “if there is Paradise on Earth, it is here, it is here, it is here.” How was this image created?
Answer:
Shahjahan was known as Engineer-king. During his reign different elements of Mughal architecture were fused together in a grand harmonious synthesis. His reign witnessed a huge amount of construction activity specially in Agra and Delhi. Diwan-i-Khans or Am were the examples of his well planned architectural activity. These courts Diwan-i-Am or Khas were also described as chahil suto means forty pillared hall, placed with large courtyard. Taj Mahal, the grandest architectural accomplishment of his reign. It is one of the wonder on the earth

This image was created as a result of his marvellous architectural skill.

Question 7.
How did the Mughal Court suggest that everyone-the rich and the poor, the powerful and the weak-received justice equally from the emperor?
Answer:
Mughal emperors were known for their administrative skill. They introduced many reform in the field of social and political field. Akbar was first to introduced this reform. Everyone was treated equally without any discrimination. Shah Jahan hanged a golden chain in front of his Mahal. Anybody at any time needs justice can struck that bell. All rich and poor who were not satisfied with the justice can struck that bell and get justice.

Except this people can get justice at lower level. If they did not satisfy with the decision of lower court, directly they could appear in the emperor s court, where they can get justice.

Question 8.
What role did the Yamuna play in the layout of the Mughal city at Shahjahanabad?
Answer:
The river Yamuna played a crucial role in the layout of the Mughal city at Shahjahanabad. The imperial palace commanded the river front. Only specially favoured nobles were given access to the river. All other persons had to construct their home in the city away from the river. Taj Mahal was also constructed on the left edge of this river. In Agra at Taj Mahal white Marble mausoleum was placed on terrace by the edge of the river as the garden was to its south. The geographical location of the river influenced the emperor to construct both cities on the edge of the river, so that they can be easily connected.

Question 10.
Look at figure given below. How could that building be constructed faster today?
Answer:
Now a days with the development of technology, new machines, tools, and materials the above building can be constructed more faster and better.

Question 11.
Find out whether there is a statue of or a memorial to a great person in your village or town. Why was it placed there? What purpose does it serve?
Answer:
In Delhi we have many statues or memorials. These remind us about our past glory. It serves the purpose of unity, brotherhood, etc. 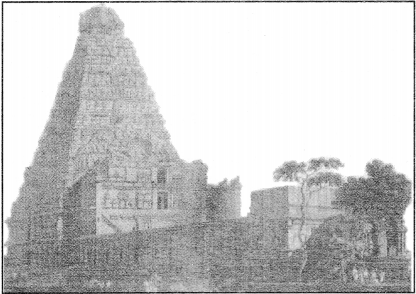