Question 1.
Who was considered a ‘Foreigner’ in the past?
Answer:
In the medieval period the term ‘Foreigner’ was used for any stranger who appeared say in a given village who was not a part of that society or culture. For example, a city-dweller, might have regarded a forest-dweller as a ‘foreigner’.

Question 2.
State whether true or false.
Answer:
(i) We do not find inscriptions for the period after 700.
(i) The Marathas asserted their political importance during this period.
(iii) Forest-dwellers were sometimes pushed out of their lands with the spread of agricultural settlements.
(iv) Sultan Ghiyasuddin Balban controlled Assam, Manipur and Kashmir.
Answer:
(i) False
(ii) True
(iii) False
(iv) False

Question 6.
In what ways has the meaning of the term “Hindustan” changed over the centuries?
Answer:
Today, the term “Hindustan” we understand it as “India” However, when the term was used in the thirteenth century by Minhaj-i-Siraj, a chronicler who wrote in Persian, he meant the areas of Punjab, Haryana and the lands between the Ganga and Yamuna. He used the term in a political sense for lands that were a part of the dominions of The Delhi Sultan. However, in the early sixteenth century Babar used Hindustan to describe the geography the fauna and the culture of the inhabitants of the sub continent.

Though the idea of a geographical and cultural entity like “India” did exist the term “Hindustan” did not carry the political and national meaning which we associate with it today.

Question 7.
How were the affairs of Jatis regulated?
Answer:
Jatis framed their own rules and regulations to manage the conduct of their members. These regulations were informed by an assembly of elders, known as jati panchayat. The Jatis were required to follow the rules of their villages.

Question 9.
What are the difficulties historians face in using manuscripts?
Answer:
Manuscripts are hand written accounts of the contemporary world. During that time there were no printing press, so scribes copied manuscripts by hand. As scribes copied manuscripts they also introduced small changes-a word here, a sentence there. There brief differences grew over the centuries of copying until manuscripts of the same text became substantially different from one another. This created a lot of difference and created difficulties to the historians, what the original author was trying to say.

The British historians divided the Indian history into three periods’

The above division was done on the basis of ideas that the religions of rulers was the only important change that took place and no other important change took place in the field of social and cultural life. However, the modem historians classify the history into the following three parts

The thousand year of Indian history witnessed considerable change. After all, the sixteenth and eighteenth centuries were quite different for the eight or the eleventh centuries. Therefore deserting the entire period as one historical unit is not without its problems.

Question 11.
Compare either Map 1 or Map 2 with the present-day map of the subcontinent, listing as many similarities and differences as you can find. 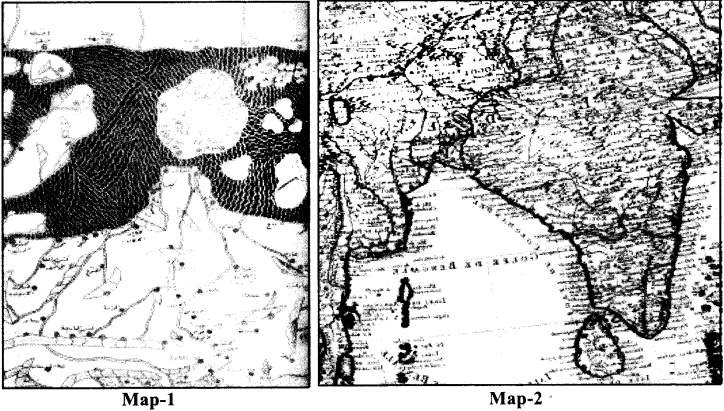