2. I felt very unpleased and disgusted. I want to remind my class teacher and classmates that I too, am a human being. The same blood is flowing in my body also. The constitution has granted us equal status. No body has the right to discriminate us.

2. If I would be in the Ansaris’ place, I would argue with the landlady and take her to her neighbour’s house where fish was being cooked. I would also tell her that all human beings are equal and there should be no discrimination regarding caste.

Question 5.
If you were one of the Ansaris how would you have responded to the suggestion that you change your name?
Answer:
I would straightaway ask the property dealer to change his surname first.

Question 6.
Can you think of an incident in your life in which your dignity was violated? How did this make you fell?
Answer:

Question 7.
What is the midday meal programme? Can you list three benefits of the programme? How do you think this programme might help promote greater equality?
Answer:
Midday meal refers to a programme introduced in all government elemantary schools to provide children with cooked lunch.
Benefits :

Question 8.
Find out about one government scheme in your area. What does this scheme do? Whom is this scheme set up to benefit?
Answer:
During winter (2010), about 5.5 lakh children of class I to HI in MCD- run primary schools in the capital will be given money to buy woollen caps or gloves.

This will be in addition to the Rupees 500 given to each student of the schools for purchasing winter uniforms. This scheme will help the poor children from the bitter winter cold and also help improve the attendence of the students.

‘Universal adult franchise’ is important because all people can cast their votes without any discrimination.

Question 11.
In what ways was Omprakash Valmiki’s experience similar to that of the Ansaris?
Answer:
Similarity between their experience

Question 12.
What do you understand by term “all persons are equal before the law”? Why do you think it is important in a democracy?
Answer:
The Constitution recognise every person as equal. It means ever individual in the country including male and female from all castes, religions, tribes and educations are recognised equal.

It is important in democracy because people can get the shelter to the court of get their Fundamental Rights enforced if they are not provided so.

Question 13.
The Government of India passed the Disabilities Act in 1995. This law states that persons with disabilities have equal rights, and that the government should make possible their full participation in society. The government has to provide free education and integrated children with disabilities into mainstream schools. This law also states that all public places including buildings, schools, etc., should be accessible and provided with ramps. 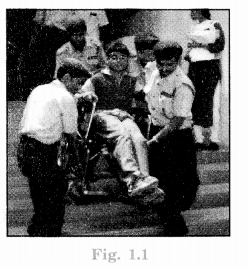 Ramps facilities should be provided to make the building more accessible for him. As the disabled person on wheel chair is carried down stairs by the two security men, he feels insecure. It will affect his dignity as well as his safety. If he was provided with the facilities of lift or ramp he will definitely feel more secure.