IPL 2021 New Schedule, Venue, Dates, Points, Match Table is released. Get New dates for IPL 2021 from this page now. BCCI has released IPL 2021 New Schedule. According to this new schedule, now IPL 2021 will start on 19 September 2021. The final match of IPL is going to be the most exciting. Now the final match will be held on 10 October. Earlier, IPL games had to be interrupted due to Corona. IPL is now being launched from 19 September in view of the huge appeal made by the audience. 31 matches of the Indian Premier League were left due to IPL being interrupted. Now, these matches have been divided on the basis of 10 doubleheaders, 7 single headers, and 4 playoffs.

The long wait by the IPL spectators is now ending on 19 September 2021. The remaining 31 matches in the IPL 2021 New Schedule will now be concluded in 21 days with 10 doubleheaders, 7 single headers, and 4 playoffs to clear the way for the ICC T20 World Cup 2021. We are going to give you detailed information about the IPL 2021 New Schedule issued by the Board of Control for Cricket in India (BCCI) in this article.

The BCCI suspended IPL 2021 in May because of the Covid 19 spread across players. At this time, the BCCI has informed about the completion of the remaining 31 IPL matches in September-October.

The complete information about the IPL New Schedule 2021 is being given in the article. At this time, the BCCI has rescheduled the IPL matches and filled the audience with renewed enthusiasm. Everyone wants to know how the remaining matches will be organized in the new IPL schedule.

The suspension of the 14th edition of the IPL league caused much disappointment from the spectators. Now by IPL Reschedule, BCCI has again filled the enthusiasm of IPL in the audience. Now you have given information about the new information released by the Board of Control for Cricket in India (BCCI) like IPL 2021 schedule, new dates and new venues, points table, orange cap, timetable and team list, etc.

We are going to give you information about the remaining 31 matches of IPL. Let us tell you that these matches will now be played in Dubai. The covid tests of the players of each team have been done before these matches are finalized. The good thing is that now the date of organizing the matches has been released. You can see the complete information of IPL New Schedule Date in the table given below. 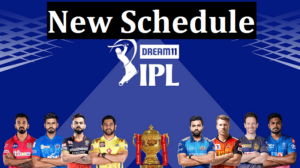 At the beginning of this year’s IPL 2021, Royal Challengers Bangalore (RCB) and MI (MI) shook the entire Chennai with a bang. This year’s IPL, which started on 9 April, filled the audience with enthusiasm. IPL 2021 matches were halted because of Corona. Now ending the specter of spectators, the BCCI has rescheduled the IPL to complete the remaining matches from 19 September.

The information given to you in the above table is before IPL Reschedule. The given table will be updated soon with the new table information. You will soon be able to get information about the dates, location, match table, etc. of the new matches. We will send the new information to you soon through the table. Till then you can see other information related to the new matches.

The IPL 2021 Schedule Stadium Name List will be notified through the table soon. If you haven’t seen the Venue list yet, don’t worry, we’ll let you know soon. Now you can get all the information related to IPL directly on your mobile notifications. For this, you have to allow the notification of the website. The information in the above table will be given to you soon.

The above table is taken from icccricketschedule.com. Based on this list, you can see the position point table of your team. The table gives figures based on 58 matches to be held in IPL 2021 so far. The table will be updated as new matches begin. All the information about IPL Point List 2021 will be given through the table.

As per the latest information received by the BCCI, the IPL Schedule New Dates is being released soon. According to information received from secret sources, now the remaining 31 matches of IPL 2021 are being held between 19 September 2021 to 10 October 2021. We will provide you the information soon with its list. The table below will be updated as soon as possible. As of the new dates, now 31 matches will be completed in 21 days.